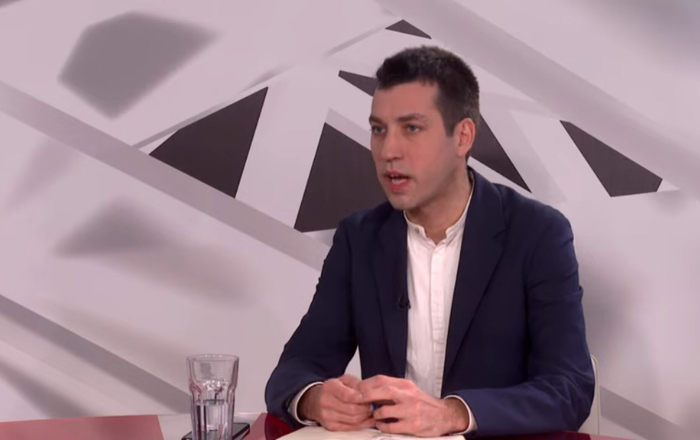 Dobrica Veselinović, head of the opposition group “Ne davimo Beograd – Moramo”, said that he was not surprised that the quorum for today’s session of the Belgrade City Assembly, where, among other things, the removal of the mayor was decided, was also provided by councilors from the ruling coalition, but he also said that “Sapić doesn’t even matter”. “Because, even if Šapić leaves, the concept remains… That’s why the illustration for him is the ‘tip of the iceberg’. We have to change ideologically how this city is run, because the policy of impoverishment, politicization, public-private partnerships and failure to respond to the challenges of the 21st century continues,” Veselinović emphasized in the show “Iza vesti” (behind the news) on N1.

Veselinović said that he is not surprised that the councilors of the ruling party also provided a quorum for the session of the Belgrade Assembly.

“For me, the first indication that something is strange is that they did not reflect in the media, on the city’s website, that the session was scheduled. I believe that they calculated and judged that it is better for them to appear, except for Šapić, who did not come, and to speak the tried-and-tested scripts that construction is going on in Serbia, that everything is fine in Belgrade, and not to answer questions,” he said. Veselinović.

The members of the opposition proposed to consider the conclusion obliging the Secretariat for Environmental Protection to submit a report on the implementation of the Air Quality Plan so far. Also on the agenda was the Proposal for conclusions obliging several city secretariats to make a decision on the development of a housing strategy for socially responsible housing in the period 2023 – 2033, and a decision will also be made on the Proposal for conclusions obliging the Secretariat for Energy to make a decision on reducing the bill for the period when there was no heating.

When asked whether the government, by giving a quorum for the session, “triggered” the opposition, Veselinović says that the ball is, however, in “their court”.

I would say the ball is in their court, we haven’t heard any answers to the burning questions.” Šapić is only the tip of the iceberg. We have not heard anything that has been done in the field of energy efficiency, we have no answer to the housing crisis, Belgrade is still among the most polluted cities. The ball is on how to make the lives of citizens better,” emphasized Veselinović.

According to him, this was the first time that government councilors voted for something proposed by the opposition.

“I think it’s the first time, and that should be normal.” This is the most normal thing – for someone to come and cross arguments about how the city should develop,” he said.

N1: But is this not discussed?

“They think that it will be most profitable for them to repeat the mantra that life is great in Serbia, that Belgrade is growing and developing, but we have no answers… I asked the question – what are we going to do with air pollution, we have nothing on how to solve this crisis “, fit.

This was also the first session that Mayor Šapić did not attend.

“Yes, he came every time.” This was the sixth session, he scheduled a strictly controlled press conference for tomorrow, where he will give his version of the truth,” said Veselinović.

When asked whether the opposition showed power or weakness with this session, he says:

The opposition, however, cannot replace Šapić unless the SNS wants it.

“…Or coalition partners of the SNS”, adds Veselinović. He says that there are “two stories”.

“One is Šapić, he is the tip of the iceberg, and the other is solving three crises in Belgrade.” “We submitted requests, Nikola Nikodijević could have separated the discussions, scheduled two sessions, and I’m not saying that we won’t have them in the future,” he said. The goal, he says, is to get out “of the negative mode”.

“It was important for us to say that there are solutions for these three crises, to inform that someone cares about the citizens and that there is a possibility to pursue a different policy.” The elections will take place, the goal is to get out of that negative mode so that nothing can change, I think that is very important… It is up to us to do all the pressure,” emphasized Veselinović.

The initiative to replace the mayor cannot be launched again in the next six months.

“That is a question for the SSP, they work in accordance with their political culture, it is up to us to show that we support and stand behind every meaningful proposal of the opposition.” It is their political decision, it is our political decision that we have to react and solve the crises that exist. I don’t even think that Šapić is that important. Because in depth we have the same SNS and SPS policies that lead this city”, said the head of the councilor “Ne davimo Beograd – Moramo”.

When asked whether the concept or Šapić is important, Veselinović says that concepts are always more important.

“Because, even if Šapić leaves, the concept remains… That’s why the illustration for him is the ‘tip of the iceberg’.” We have to change ideologically how this city is run, because the policies of poverty, politicization, public-private partnerships, and failure to respond to the challenges of the 21st century continue,” he emphasized.

And when he expects the Belgrade elections, Veselinović says that they are constantly being talked about.

“I don’t think it’s even a matter that, without offending anyone, anyone should ask about something.” They came with ready-made scripts, they voted for Bus plus, and then for the cancellation of Bus plus… They are the executors of something that comes from the top. That’s how I look at Šapić – as Vučić decides. I think the elections will be held in 2024,” said Veselinović.

Did Serbia already give up on the EU ?

The movement Ne davimo Beograd believes that Serbia should harmonize its foreign policy with the European Union, otherwise, our country is on the way to losing its most important

Dobrica Veselinović, head of the opposition group "Ne davimo Beograd - Moramo", said that he was not surprised that the quorum for today's session of the Belgrade City Assembly,