The proposal for the work of opposition includes the formation of program-ideological electoral platforms which will work together towards creating better electoral conditions, cooperate on election control, respect one another mutually, without attacking one another. In case of winning the elections, the platform with the most trust of the citizens will get joint support for mayoral elections, i.e., the election of prime minister, and all platforms will consider support for one presidential candidate. 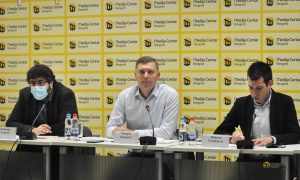 Speaking about this proposal, Radomir Lazović pointed out that he respects conceptual and ideological differences of opposition organizations, but offers a framework for joint work on the most important goal, which is the change of the criminal regime of Aleksandar Vučić. “All organizations and individuals who can and want to work together and advance through that cooperation should network and agree on a joint approach. For us, that is a green-left group. We cannot imagine the anti-vaccination Dosta je bilo or nationalist Dveri as good partners for Ne davimo Beograd. That is why we suggest several groups similar in terms of program and ideology, but with cooperation and support in the election process”.

Nebojša Zelenović referred to successful models of cooperation in the region, pointing out the principle applied by organizations from Slovenia, which is that the political platform that gets the most votes, gives a candidate for a mayor or prime minister after the elections. “We can see that the citizens want to vote for real solutions that will advance their everyday lives, and a group of green-leftist organizations we belong to bases its work precisely on that. People told us clearly they want new faces, new politics, and real solutions”.

Dobrica Veselinović pointed out that it is necessary that all political organizations from the opposition cooperate on the election control and respect one another mutually, without attacking one another, as well as to work together so that more citizens would vote against this criminal regime. “It is very important to highlight straight away that there is no cooperation with SNS or SPS. We saw in the past that there were such situations on a local level and it is important to nip it in the bud entirely”.

The Road Towards Victory

Having in mind that the most important task of the opposition is replacing the nondemocratic and criminal government, while also having in mind program and conceptual differences between parties and organizations from the opposition, Ne davimo Beograd and Zajedno za Srbiju propose a cooperation model and coordinated work for most efficient achievement of the desired goal. We believe there is a wide political space for cooperation and joint action that would give results, without exhausting opposition groups in fruitless debates and exhausting mutual fights. We believe that the path to victory leads to the following steps: