Representatives of the the Don’t Let Belgrade Drown Movement and the political platform Solidarity requested that the Ministries of Labor and Interior and the Prosecutor’s Office immediately investigate the treatment of workers and indications of human trafficking at the Linglong factory in Zrenjanin reported by media outlets and civil society organizations. 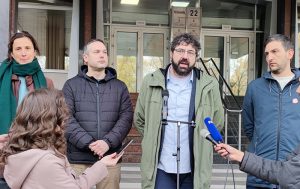 Radomir Lazović said that the representatives of the Movement saw with their own eyes that the Vietnamese workers were living in circumstances akin to slavery, and called for solidarity with them. He stated that the Movement recognizes the consequences of the policy of constantly shrinking labor rights implemented by the current government, which are visible in production plants and construction sites across the country ina addition to Zrenjanin.

Aleksandra Lakić, spokesperson for Solidarity, stated that the treatment of workers in Linglong is in contradiction with the achievements of civilization and the achievements of workers’ struggles for dignified working conditions. She reminded that Serbia is a signatory to a number of conventions of the International Labor Organization, whose provisions it does not respect, although it is legally obliged to do so.

She also said that in recent years, large sums have gone to subsidize foreign companies, while at the same time laws are being adopted that facilitate the exploitation of workers. As one of the examples, she mentioned the Law on Seasonal Work and Amendments to the Law, the adoption of which is expected soon.

The Solidarity spokeswoman also referred to the statement of Minister Momirović that the workers could find decent housing on their own, saying that such words can only come from a person who has never fought to ensure his own existence and who “parasitizes on the work of those who sell their dignity to survive. “

“I think that consistent application of the law to all employers and all workers, regardless of where they come from, is a precondition for living in a healthy society in which every life is equally valued,” Lakić said.

Spokesman for the political platform Solidarity, Milos Baković Jadžić, reminded that this is not the first time that foreign workers in Serbia in similar jobs were put in a catastrophic position in terms of their human, especially labor, economic and social rights. In that sense, he referred to the situations in which Indian and Pakistani workers found themselves. At the same time, people from Serbia are experiencing bad treatment at foreign companies in Serbia, said Jadžić, reminding of the poor working conditions in British companies in southern Serbia, South Korean companies in the centra Serbia and the German company Drexelmeier in Zrenjanin.

Baković Jadžić emphasized the importance of the assistance provided to Vietnamese workers by the organizations A11, Astra, Solidarity Kitchen, and the Zrenjanin Social Forum, adding that representatives of Solidarity are currently on the ground.

“Apart from calling on everyone to continue providing solidarity to the vulnerable, I would like to emphasize that we need political change. “As long as we have this regime in power, we will not be able to adopt and implement alternative labor legislation, examine the disastrous consequences of foreign direct investment policies which give away our money to foreign companies through subsidies,” said Jadžić.

Finally, Robert Kozma emphasized that in the case of Zrenjanin, there are clear indications of human trafficking for the sake of labor exploitation.

“These people had to pay an intermediary to come to Serbia, then their passports were confiscated, then they were physically prevented from leaving the space where they live and work. “They don’t even know what their employment status is in Serbia, they don’t know which contracts they signed, they don’t know how much they earn or when they will be paid,” Kozma explained.

Kozma reiterated that the Don’t Let Belgrade Drown Movement and Solidarity call on the competent authorities to react:

“The competent labor inspectorate, but also the competent prosecutor’s office and the competent inspection of the Ministry of the Interior were obliged to react a few days ago,” Kozma said, in order to dissuade the public from suspicions of human trafficking, or file criminal charges and initiate proceedings against those responsible.

Such companies often pollute the environment, according to Don’t Let Belgrade Drown, and the government is sending the message to citizens that they have to choose between gross domestic product and environmental protection. This, as Kozma stated, is incorrect:

“There is enough intelligence and enough knowledge in Serbia to start the economy, and at the same time to provide quality jobs and protect the environment.” But that is only possible if we remove this government and implement a new policy. That is why we need to go to the polls in April and fight for the ability to live with dignity from our own work “, concluded Kozma.

On Monday 21 February, candidate for mayor of Belgrade Dobrica Veselinović, together with Ne Davimo Beograd activists and the MORAMO coalition, came by tramway to the City Electoral Commission and handed over the collected signatures for the city elections in April. They previously submitted signatures for the legislative elections in the Republic Electoral Commission.

Stefan Tasić for The Radicals: Transforming the System: New Hope for Serbia

Ne davimo Beograd has grown into an antipode to established politics and a force with the potential to transform an authoritarian and unjust system. It has developed bottom-up activism as its trademark to answer undemocratic and particular interests-focused politics.