On October 2nd, activists from the Serbian Progressive Party tried to sabotage the holding of a neighborhood discussion and film screening in Karaburma, organized by Ne davimo Beograd (Don’t Let Belgrade (D)rown). The Progressives, in their well-known style, set up their own stands at the same time and in the same place as our event. Although the public event was reported to the competent days in advance, and the police have an obligation to protect reported rallies, they refused to react to allow the event to take place without interference. 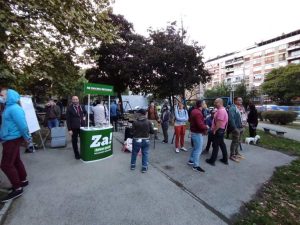 What is additionally worrying is the undisguised identification of people in T-shirts of the Serbian Progressive Party who feel so free and above the law that they can appear at a police-registered gathering and try to sabotage it. It is obvious that the law does not apply to them, since the police refused to intervene and remove them from the rally, which was duly reported. We organized tonight’s gathering with our neighbors in the form of talks about the lack of public spaces and cultural facilities in the capital. Speakers at the conversation were: Dobrica Veselinović, member of the Movement’s Small Council, Branislav Dimitrijević, coordinator of the group for culture and Luka Petrović, coordinator for the territorial group covering the right bank of Palilula. In front of the former Slavica cinema, in addition to conversations, we also organized a screening of the film The Great Dictator by Charlie Chaplin.

The Ne davimo Beograd Movement has been under attack for years by the regime of the Serbian Progressive Party and their satellites from the ranks of the extreme right. For years, we have been the target of regime tabloids, under the pressure of lawsuits, wiretapping and surveillance in an attempt to sabotage the work of the Movement, and our premises have been attacked, with unknown perpetrators trying to break in three times. The police and the Public Prosecutor’s Office failed to find and prosecute those responsible in all of these cases.

Such attacks only serve to show that the government is afraid, and that we are getting closer to regime change, and this is especially the case in Belgrade, where the Ne davimo Beograd Movement has doubled its support in the previous three years. Not only will the attacks not deter us, but they have given us with the strength and determination to fight to liberate Belgrade, stop all harmful projects of the criminal government and make our city a good city for everyone.