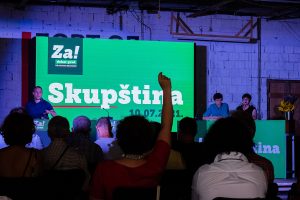 The  Ne davimo Beograd Movement held its third Assembly, at which reports on the work of the movement’s bodies were presented, inaddition to a plan on how to liberate Belgrade, stop all harmful projects of the criminal government and fight for Belgrade to become a good city for everyone. At the final part of the event, the “Charter for a Good City” was presented, which was supported by over 150 public figures and independent intellectuals.

The assembly took place as the Movement is facing new challenges, having doubled the support of citizens in the previous three years, as well as the number of members, and now represents one of the strongest opposition forces in Belgrade, according to independent research. 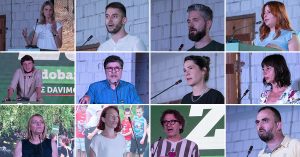 In the working part of the event, member of the Small Council, Robert Kozma, presented a report on the work of the movement between the two Assemblies, as well as a financial report for the entire 2020 and the first six months of 2021.

The newly established thematic groups for culture were presented to the membership, in front of which Branislav Dimitrijevic spoke and the care for animals group led by Lola Joksimovic, as well as the international secretariat of the movement, whose work plan was presented by the coordinator Predrag Momčilović.

This was an opportunity to point out a large number of good examples of the work of municipal groups, which in the previous period held over 70 neighborly talks and actions in all parts of Belgrade. Ljubinka Drobnjak Pejčić from Čukarica, Ana Krkobabić from Voždovac, Aleksandar Veličković from Obrenovac, Maja Lilić from Palilula, Irena Fiket from Vračar and Dušan Pavlović from Rakovica presented their activities. The movement also supported a large number of protests and activities of other groups and activist organizations.

Also, new internal procedures in the work of the organization were adopted, which were presented by member of the Small Council, Biljana Đorđević.

One of the important issues, especially in the context of very bad electoral conditions, is election control, and the work of our election control team was presented by Stefan Tasić. The movement has already managed to animate over 700 citizens who are ready to fight against election theft, and a large number of them have already passed the training for control.

Professor Đorđe Pavićević, coordinator of the political council of the movement, spoke about the steps that need to be taken in the preparation of the movement’s election agenda, the improvement of the program and possible ways to prepare the list of candidates. Đorđe Pavićević, also on behalf of the movement, is participating in the EU-mediated negotiations on electoral conditions, so the expectations from this process were also discussed.

Natalija Stojmenović presented the short-term work plan of the movement in the next three months. About 50 different events are planned across the city. 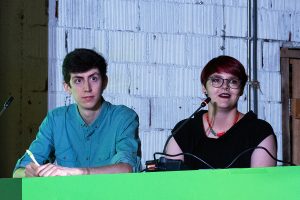 The public part of the program began with a panel discussion “Belgrade – a good city for all” in which participants presented the plans of Ne davimo Beograd, how to liberate our city and stop all harmful and criminal government projects, or how to fight for Belgrade to become a good city for all who live, work or visit it.

The atmosphere from the street actions, as well as numerous protests in which we participated and neighborly conversations throughout the city was conveyed.

It was also an opportunity to talk about the electoral conditions and negotiations that are taking place under the auspices of the European Union, about cooperation between Ne davimo Beograd and other organizations and the best way to win the city elections and thus start an avalanche of changes throughout the country.

We also looked at the encouraging results of related organizations in the region, such as URA from Montenegro and Možemo! from Croatia, but also at research that shows that Ne davimo Beograd is one of the strongest political organizations in Belgrade. 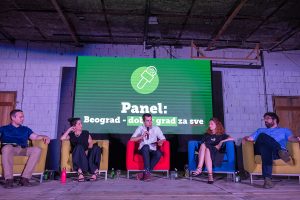 Charter for a good city

The third Assembly of the Ne davimo Beograd movement ended with the presentation of the “Charter for a Good City”, which was read by actor Ivan Jeftović. This document is a set of solutions that should return the management of Belgrade to the citizens and make Belgrade a just, solidary and green city in which those who are endangered, poor, scared or helpless today will feel good. A good city is a city in which all those who live in it have the main say, and not corrupt party cliques, suspicious investors or organized criminals, it is stated in the Charter.

Public action in Jagodina: Your Word is Your Power – You are Not Alone

The Ne davimo Beograd Women's group is part of the Independent Women's Group, composed of representatives of women's organizations, civic initiatives and socially engaged individuals, which held a rally in support of women and girls from Jagodina who are potential victims of sexual exploitation on Saturday, June 5, at the People's Youth Square in Jagodina. Through direct action in the field, we sent a joint message to potential victims that they are not alone in this process, and that they are guaranteed assistance and support by law without having to reveal their identity and participate in the investigation and court proceedings.

Veselinović for Al Jazeera: Instead of poisoning Belgrade’s citizens with vulgarity, we can offer kindness

"We want to be the better, the good side of Belgrade, the one that resides on the opposite side of the street from the one where illegal demolition and construction takes place," says Veselinović from Ne davimo Beograd movement.

The Ne davimo Beograd Movement held its third Assembly, at which reports on the work of the movement's bodies were presented, inaddition to a plan on how to liberate Belgrade, stop all harmful projects of the criminal government and fight for Belgrade to become a good city for everyone. At the final part of the event, the "Charter for a Good City" was presented, which was supported by over 150 public figures and independent intellectuals.