* Jelena Jerinić, Ph.D., full professor at the Faculty of Law at Union University in Belgrade, 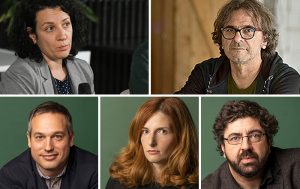 The head of the parliamentary club will be Radomir Lazović, and the deputy head will be Biljana Đorđević.

The parliamentary club will act independently, but in communication and coordination with coalition partners within the MORAMO coalition. Independent action, according to the rules of procedure, provides for more time for debate and speeches during parliamentary sessions.

The Parliamentary Club “Green-Left Club, Ne Davimo Beograd, MORAMO” will act in opposition in the parliament and no cooperation with SNS, SPS and those who support them is possible.

We will be open to technical cooperation with all opposition groups, and for programmatic cooperation, with those that are ideologically close to us or with which we have programmatic agreement on specific issues.

The strategy of action in the Assembly will be aimed at using all available institutional mechanisms with the aim of a) exerting pressure on the regime to act within the legal framework and thus narrow the arbitrariness of the ruling coalition and with the aim of b) promoting programmatic solutions and policies Ne Davimo Beograd, that is, drawing attention to the daily issues of citizens.

The mechanisms we will use are 1) discussions at sessions, work in committees and parliamentary questions, 2) initiatives to form inquiry committees to resolve affairs, 3) public hearings to gather information, 4) informing the public about the work of the assembly, 5) initiating procedures for constitutional and legal assessments.

The committees in whose work we will participate are:

+ The Committee for Children’s Rights, in whose work all parliamentary groups participate

We hope that we will justify your trust and support and that we will properly represent the interests of citizens!

Members of the Parliament who make up the “Green-left club, Ne davimo Beograd, MORAMO”

Ne Davimo Beograd will act in the National Assembly in an independent parliamentary club, which will consist of five members of parliament, namely:

Biljana Đorđević is a political scientist and assistant professor at the Faculty of Political Sciences of the University of Belgrade, where she teaches courses in the field of contemporary political theories. The field of her academic and activist research and activities are contemporary theories of democracy, activist citizenship, political ethics of migration, the connection between democracy and feminism, and social constitutionalism. She is a member of the Presidency of the Association for Political Science of Serbia and the Serbian Association for Legal and Social Philosophy, the Board of Directors of A11 – initiative for economic and social rights, the Network of Academic Solidarity and Engagement – MASA and the international observatory of municipalism – Minim.

Jelena Jerinić is an associate professor at the Faculty of Law at Union University in Belgrade. He teaches constitutional law, administrative law and local self-government law. She is a member of the Group of Independent Experts for the European Charter on Local Self-Government of the Council of Europe. She is a member of the Legal team Ne Davimo Beograd.

Đorđe Pavićević is a full professor at the Faculty of Political Sciences of the University of Belgrade. Prof. Pavićević teaches subjects in the field of contemporary political theory at all three study levels. He is one of the academic workers who takes an active part in political and social events in the country and in Belgrade. In the Ne Davimo Beograd movement, he was engaged as a coordinator of the Political Council.

Robert Kozma was born in 1983 in Subotica. He graduated in political science at the Faculty of Political Sciences in Belgrade and the Central European University in Budapest. In the past ten years, he has been designing and implementing programs of intercultural education and education for democracy. He has been in the Ne Davimo Beograd movement since its inception, and he is mostly engaged in the work of the Education Group and at the same time in developing alliances with similar initiatives and movements in Serbia.

Radomir Lazović was born in 1980 in Belgrade. He has been active in the civil sector for more than 12 years, working at the Institute for Urban Policies, in the field of cultural policies; participation of citizens in making decisions about the development of the city; civil, political and social rights; democratic innovations and media. He participated in the launch of several initiatives (such as Ulična galerija, Inex fim, Movie theatres: Povratak otpisanih, Occupation of the Zvezda theatre) that advocate for innovative use of public spaces, fair management of resources, transformation of public services and a just, solidary and democratic society. From 2015 to 2017, he was the president of the board of directors of the Association of the Independent Cultural Scene of Serbia.