Green-Left MPs in the Serbian Parliament, from the movement Ne davimo Beograd, have submitted proposals to the Parliament for the formation of a committee of inquiry on the demolition in Savamala area, as well as a committee that would deal with the contract details of the “Belgrade Waterfront” project, said the MP Jelena Jerinić. 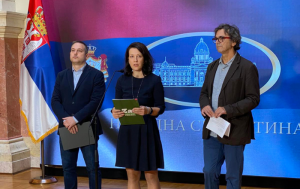 “Despite the intentions of the Serbian Progressive Party (SNS) to make the institution of committees of inquiry completely meaningless, by submitting these proposals we wanted to show that we are not giving up on the truth about the events in Savamala, as well as on the Belgrade Waterfront project,” Jerinić told reporters in the Serbian Parliament.

Jerinić also assessed that the formation of 21 committees of inquiry proposed by that party would not suit the SNS, because as she stated, each parliamentary group has one member in each committee.

“We should count the parliamentary groups that participate equally in the committees of inquiry. Each has one representative, it is not about proportional representation, so I do not think it would be in their favor to form all these 20 or so committees that they proposed,” she pointed out.

MP Robert Kozma said that they are demanding the establishment of an inquiry committee for the Savamala case “because in the past six years the state authorities have done almost nothing, they have not provided proper protection to the citizens and they have not prosecuted those responsible for organizing the demolition”.

“Precisely because we responsibly understand the control function of this parliament and the role of the committee of inquiry, we demand that this convocation of the Parliament declare the demolition in Savamala and allow citizens to get answers to all questions in an unbiased way,” said Kozma.

He pointed out that he will not allow the institution of inquiry committees and the new convocation of the Parliament “to be called into question by various obstructions of the SNS” and added that he will insist the initiative for the establishment of that inquiry committee to be put on the agenda of the Assembly.

MP Đorđe Pavićević said that in addition to the committee of inquiry, they also propose the establishment of a commission that would deal with state and city investment in the “Belgrade Waterfront” project, including all preparatory work, land preparation, expropriation and demolition costs in Savamala.

“Well, let’s see the promises by which this project was declared a project of public interest, because it is worth 3.5 billion dollars. The State entered into this deal with a 32 percent share and announced it will be, in short, the deal of the century”, said Pavićević.

He stated that last year, the company “Belgrade Waterfront” owed the city of Belgrade about 100 million euros and that this debt “disappeared due to a completely miraculous agreement between the city authorities and representatives of the company by investing in infrastructure that no one saw.”

“There are serious doubts that both the city and the state are seriously financially damaged by the implementation of that project,” Pavićević said and added that he will ask the commission to investigate the operations of the company “Belgrade Waterfront” and all other related companies.