The Serbian Progressive Party (SNS) continues to form fake green organisations whose name should confuse the public and the media, as well as manipulate voters in the upcoming elections and thus reduce the election result of the MORAMO coalition. The Serbian Business Registers Agency (APR) recently registered the “Green-Left Coalition Movement”, the “Association of Environmental Organisations of the Greens of Serbia”, the “Green Action Movement” and the “Green Revolution Movement”.

At the end of the year, the association “Green-Left Coalition Movement” was registered in the APR, which indicates to the citizens by its name that it is a green-left coalition MORAMO, while it was registered by Nikola Andjelkovic, based in Vidikovacki venac Street in Rakovica. On the same day and with, word for word, identical statute, the association “Green Revolution Movement” was registered, with its headquarters in Smederevo, and it was founded by Marko Stolić.

Two more associations have been registered in Vidikovacki venac Street, in the same apartment, and the founder is the same person, Mitar Mitrovic. Namely, it is about the “Green Action Movement” which sounds very similar the Open Civic Platform of AKCIJA of Nebojsa Zelenovic and the “Association of Environmental Organisations of Green Serbia” which differs in one word from the real SEOS association, known for organising a large number of blockades and protests against lithium mining and Rio Tinto.

“The basic role of these organisations is to confuse the media, the public and voters. They sometimes present themselves as opponents of the regime, sometimes as collaborators, but their real goal is to confuse and thus deter people from supporting the authentic green political organisations. The government does not know how to solve the problem of pollution or how to improve our environment, but it knows very well how to subvert, lie and cause chaos. They are the best in that.” said Radomir Lazović on this occasion and underlined that this is a clear sign that the regime is afraid of losing the elections. 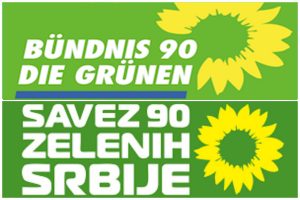 In addition to these newly formed organisations, the “Alliance 90 / Greens of Serbia” should also be mentioned. In order to deceive the voters, the Conservative Party changed its name in vain and overnight became the Alliance 90 / Greens, into which consequent money was injected. Namely, in just a few months, large amounts enabled this organization to rent and brand premises in a large number of cities, promotional materials identical to those of the SNS, and pay for very expensive advertisements and messages to influencers on social networks. We recently alerted the public to one of their bot networks, identical to the ones organized by the ruling SNS. We also recall that even the European Green Party reacted to the “Alliance 90 / Greens of Serbia” with a public condemnation, which you can see [at this link].