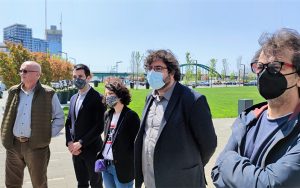 On the fifth anniversary of the demolition in Savamala, the movement Ne davimo Beograd held a press conference at Hercegovačka Street – at the very place where masked attackers demolished buildings and tied people up on election night five years ago, thus exposing the real, criminal character of Serbian government.

“Five years ago, right where we stand, masked hooligans demolished a part of the city because of the Belgrade Waterfront project. Various inspections and reports later showed that the people in the highest positions of power were involved. We are here today with our friends to remind the public about this. We are struggling for a better city that will be governed by Law and human rights, not by investors with close connections to the regime. When this Government is no longer in power, the case will be solved and we will know the identities of the people who instructed the demolition, ” said Dobrica Veselinović from Ne davimo Beograd.

Jelena Jerenić, the coordinator of the Ne davimo Beograd legal team said: “This place symbolises all the legal issues Serbia is facing.” A lot of people were terrified by this event because we became aware this can happen to anyone of us. The ombudsman’s May 2016 report stated that the State was suspended at this place, and the power was taken over for about two hours. “We understand today that the State has been taken over permanently and that many of the legal problems we are facing in Belgrade are actually only part of the overall problem,” she said.

Lawyer Rodoljub Šabic has said, on the fifth anniversary of the demolition in Belgrade neighbourhood of Savamala, that the Government “has been toying with the principles of the rule of law for five years.” Šabić assessed that it is “in the existential interest of all citizens” to determine the responsibility for this case: “Once it is allowed and goes unpunished, it will most probably happen again”.

“What happened here is a paradigm of what we live in. If we do not raise our voices, I am afraid we will continue to live in it for a long time. We are not asking for anything more than to live in accordance with the Constitution and the Law, and in this case, the completely opposite has happened, “said Šabić. 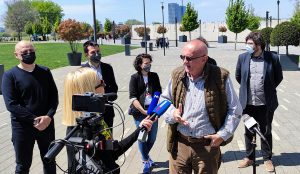 Vladimir Marković, a representative of the Transport Peroni company, whose facilities were destroyed by phantoms, spoke about the processes that were conducted in order to compensate the damage to this company.

Djordje Pavićević, professor at the Belgrade Faculty of Political Science (FPN) and coordinator of Ne davimo Beograd’s political councilsaid that the demolition in Savamala can be considered to be “death of the rule of law in Serbia”.

“After that, everything became possible – for surveillance videos to disappear, the police not to react, investigations not to be opened. This is something that must not be forgotten. “We reveal new facts about what happened here every day, as well as on the cover-up of the case, and I am convinced that those who did it will be held accountable eventually” Pavićević said. 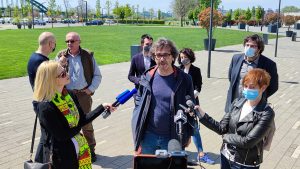 Radomir Lazović from “Ne davimo Beograd” said that in order to solve the Savamala case, “a change of the Government, that is, a criminal team that has occupied our society, is necessary.”

“This case is very important, and what is even more important is that the entire regime has made every effort to cover up the act.” That is why I call on the police officers who know what happened to testify and show that there is a healthy part of our society in Serbia” Lazović said.