The first 100 days of the new SNS governance showed the continuity of bad policies implemented by Vesić’s administration in Belgrade. Although Aleksandar Šapić tries to blame all the problems on the previous administration, like the previous government, it is clear that he is only searching for a scapegoat, while leaving citizens to face the problems. 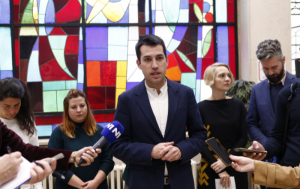 “They want to convince us that Aleksandar Šapić is someone new, that there is a new approach to politics, and in fact it is a question of the continuation of the government of the Serbian Progressive Party (SNS) and the Socialist Party of Serbia for more than a dozen years,” said Dobrica Veselinović, the head of the committee group Za Dobar Grad – Moramo!. He also adds that it is evident in these 100 days that the government does not know how to and does not want to solve the main and pressing problems of the citizens of Belgrade.

The local authorities have shown no willingness to tackle the city’s key problems, such as pollution, traffic conditions, infrastructural problems, the pressure of uncontrolled construction that benefits only investors and does not provide infrastructural solutions.

“In Mirijevska neighborhood, illegal sewage is currently being poured into a larger stream. Such problems today are no longer incidents in the city, but are the results of neglecting infrastructure problems, wrong priorities and running the city exclusively in the interests of investors”, said Jelena Vasiljević, city councilor of Ne Davimo Beograd, adding that the situation is so serious that we are potentially threatened by cholera in the city settlement, and Šapić deals with harmful projects such as the cable car on Kalemegdan.

In the first hundred days of the city government, we see the continuation of the trend of alienation of public and natural assets and their commercialization. The government announces that a new Public Utility Company (PUC) for parks will be established.

“The maintenance of parks is already done by the city’s greenery. Instead of increasing the efficiency and improving the work of existing PUC, new PUCs are being established, with the well-founded suspicion that they will serve to employ new loyal staff, as well as to redirect budget money”, continued Vasiljević and clarified that the newly established PUC will deal with ” introducing content” in Belgrade parks, which we can understand as an announcement that cafes, coffee shops and other offers of commercial content will be opened in them.

In relation to this problem, Ne Davimo Beograd insists on banning the renaming of green areas into construction lands, and calls instead on investing in green areas with the aim of reaching European standards of a minimum of 25m2 per inhabitant. This does not require a new PUC, but a clear political plan and program, as well as the necessary halting of projects that involve the construction of residential and commercial buildings near large green areas – as is currently the case with part of the forest in Kosutnjak.

At a time when the absolute poverty rate among families with more than three members reaches 10 percent, the city government reduces the budget for social housing ten times (from RSD 400 millIon to 35 million) and allocates two billion dinars in vouchers for sports equipment.

“Many families do not have the basic means of living: healthy food, a roof over their heads, funds for schooling and extracurricular activities. There are three children in every school class who do not have snacks, books and excursions, and all children will receive vouchers for sports equipment without any need analysis for this measure,” said city councilor Natalija Simović, adding that a smarter budget redistribution and prioritization is necessary, by investing in people, not in concrete and projects like the linear park, which only expand commercial spaces and make the rich richer, and do not contribute in any way to the quality of life of our fellow citizens.

The rebalancing of the budget carried out by the cabinet of Aleksandar Šapić also showed that subsidies to private kindergartens will be significantly increased, without increasing investments in state ones, thus continuing and strengthening the trend started in 2015.

“By redirecting money, we could achieve the fact that subsidizing private kindergartens really becomes a transitional measure, and by investing in the quality of state kindergartens, building new ones and rehabilitating existing ones, we would get good and affordable child protection and preschool education”, Irena Fiket announced. She added that reducing the number of children per group and hiring more staff and increasing their salaries is one of the solutions offered by Ne Davimo Beograd.