MPs of the Green-Left Club in the Serbian Parliament have started a series of meetings announced in Niš, where they will present their ideas and plans for the creation of a Green-Left party at the national level throughout the country. At the forum titled “How much is life worth in the south of Serbia”, the head of the Green-Left Parliamentary Club and one of the leaders of the Movement “Ne Davimo Beograd” Radomir Lazović confirmed the earlier announcement that the movement will spread to the whole of Serbia. 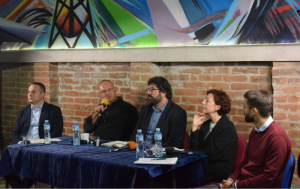 “We achieved a significant result by having our parliamentary club in the republican parliament. A good result was also achieved in Belgrade, where the Serbian Progressive Party will have a problem retaining power in the next local elections. Let’s beat them in Niš, Leskovac, Vranje, Novi Sad. I think we can really do it,” Lazović pointed out.

He said that the Movement “Ne Davimo Beograd” advocates that all people participate in politics and that every voice is heard.

“We are open to cooperation with other organizations, but there is a threshold below which Serbia can no longer go, and that is a criminal organization like SNS.” It’s crime, it’s extortion, it’s grabbing our entire society in its claws so that they and their privileged investors, partners and partners can make money,” Lazović said.

MP Robert Kozma pointed out that the political agenda of the Green-Left Club is the fight against economic and social inequalities, the fight for decentralization and democratization of our country and for a healthy environment.

Kozma stated that on the very first day in parliament, the members of the Green-Left Club wanted to dispel myths about the average salary and gross national product in Serbia.

He said that the members of the Green-Left Parliamentary Club submitted an initiative to form an inquiry committee to investigate all the circumstances of the death of eight miners in the “Soko” mine in order to enable citizens to see what the competent authorities did before and after the accident in the mine.

She said that the scale of centralization can also be seen in the protests that the residents of the Brzi Brod settlement in Niš are organizing these days against the construction of the power line, when the citizens announced that they expected a reaction from the president of the state.

“We are coming to it again, the institutions do not exist, the mechanisms do not exist. Citizens do not know how to realize the public interest, there are no local communities, there are no citizens’ councils. There is only the president and invisible citizens,” Peternel said.

According to her, the scale of centralization is also shown by the fact that out of 1,079 supported projects in culture this year, more than half of the total funds were received by organizations in Belgrade.

“It is a symbol of what happened to us.” “We used to look to the future, and now we look to the past,” Dinić said.

His opinion, Dinić added, is that people are putting up with centralization because of the tactics of constantly taking away competences, revenues and powers from different local institutions.

He said that he believes that this is a tactic that causes apathy among people regarding local politics.

He believes that the first task is to awaken in people the feeling that they can change something and that people begin to recognize each other as comrades, as people who can do something and change together.