The Ne davimo Beograd movement elected a new/old leadership at the just concluded seventh Assembly of the movement. Natalija Simović, Dobrica Veselinović, Radomir Lazović, Robert Kozma and Biljana Đorđević were elected to the highest organ of the organization, the Small Council, which is equivalent to the presidency of political parties.

This was also an opportunity to change the members of the supervisory and ethical board, who resigned due to new engagements. The supervisory board consists of Smiljka Tomanović, Dragan Nalović and Svetislav Kostić, and the ethics committee consists of Ivana Spasić, Radoje Stefanović and Borislav Stepanović. 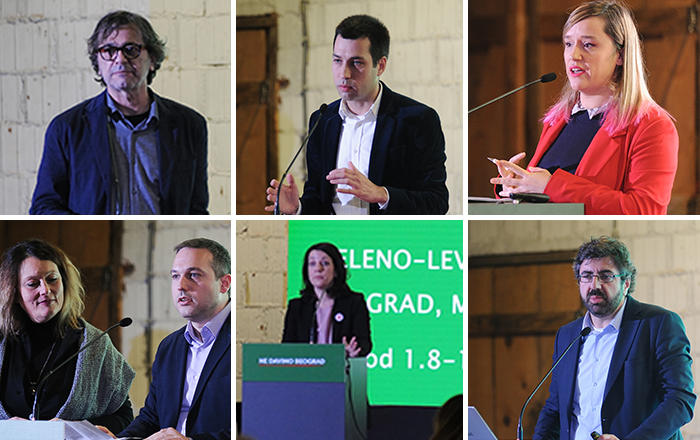 The Movement’s Small Council was elected with the same composition as in the previous two-year mandate. The key tasks that the selected candidates presented in the plan for the next period are the completion of the process of the growth of the movement Ne davimo Beograd into a green-left political party that will operate at the national level, as well as the internal strengthening of the organization through the improvement of the work of municipal committees. This is especially important considering the fact that local elections are coming soon.

After the significant results achieved in the Belgrade elections, where 100,000 votes were won and where the movement Ne davimo Beograd within the Moramo coalition is the second largest force in the city parliament, after the SNS, a change of government can be expected in a large number of city municipalities, and the movement will be ready to make a decisive contribution. At the republican level, through the transformation into a green-left political party and the expansion of activities to a large number of cities, we expect a great deal of work on strengthening the national organization.

In the past period, the Ne davimo Beograd movement has achieved close programmatic and strategic cooperation with the Right to the City organization on the implementation of educational programs and other programmatic and professional support activities for the movement, and in the coming period, this organization will act as the Center for Green Policies.

In the plan presented by the Small Council of Movements, it is noted that close relations with the European Green Party will continue, and after the formation of the new Green-Left Party, formal accession to this European political family is expected.

In the field of cooperation with other political parties, it was pointed out that the leadership will continue to advocate the position that opposition organizations should go to the elections with their natural ideological or programmatic partners, so that unprincipled partnerships, which are characteristic of a single-column appearance, will not harm anyone. refuse, but to offer the citizens to vote for the options they consider the best.

Cooperation with opposition political organizations in the city and the National Assembly of the Republic of Serbia was assessed as good, in a technical sense. There was a coordination of performances, a joint struggle to respect the rules of the assemblies, then numerous joint initiatives, as well as a request for the removal of the mayor, and an interpellation process was launched with the idea of dismissing the finance minister for making accusations that opposition MPs are traitors.

The work of our parliamentary and councilor groups, which played a significant role in the work of the National Assembly of the Republic of Serbia and the Belgrade City Assembly, was also presented at the seventh Assembly of the movement Ne davimo Beograd.

Did Serbia already give up on the EU ?

The movement Ne davimo Beograd believes that Serbia should harmonize its foreign policy with the European Union, otherwise, our country is on the way to losing its most important

Dobrica Veselinović, head of the opposition group "Ne davimo Beograd - Moramo", said that he was not surprised that the quorum for today's session of the Belgrade City Assembly,