Significant results for Ne Davimo Beograd and MORAMO in Belgrade 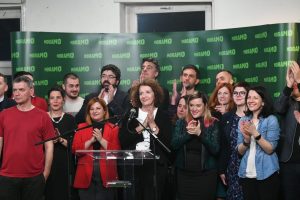 According to the preliminary results of our election control team, the MORAMO coalition won 10.90% of the votes in Belgrade and thus is the third political force in our city with almost 100,000 votes of support, behind the SNS which won 37.8% and Ujedinjeni za pobedu Beograda (United for the victory of Belgrade) with 21.47%.

On national level the MORAMO coalition won 4.54% of total number of votes in the country, which is 13 MPs of green-left coalition in the next Serbian parliament.

A significant result of the movement Ne Davimo Beograd and the coalition is an indicator that a new political force was born in Serbia, a green-left option, without the burdens of the past and with new political ideas on how to make Serbia a good place to live and Belgrade a good city for all. 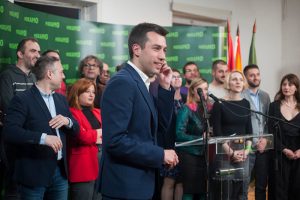 The final results depend on the objections submitted

It should be noted that these are not the final results of the elections, because objections are being submitted at a large number of polling stations where irregularities were noticed during the voting in Belgrade. In agreement with other opposition organizations, a total of about 250 complaints has been filed for minor or serious irregularities, but after the City Election Commission turned down our objections, mainly with the support of far-right so-called opposition parties, our legal team has submitted appeals to the administrative court against these decisions.

The end result also depends on this whether the parties of the regime, SNS and SPS will be able to form the government, or we will try to change them in agreement with other organizations that have passed the census.

Our controllers were also physically attacked in two cases, precisely because they filmed the use of a parallel list and the pressure on voters in front of the polling station, as well as in the building where SNS activists went door to door.

Our legal team will use all legal mechanisms so that the attackers and perpetrators of election theft are punished, and the election result corresponds to the electoral will of the citizens.

The Ne Davimo Beograd movement and the MORAMO coalition will do everything to overthrow the criminal regime of Aleksandar Vučić in both Belgrade and Serbia, and we will agree with other opposition organizations on how this change can be organized in Belgrade. One of the options is an interim government and technical cooperation of the opposition, to call new fair elections.