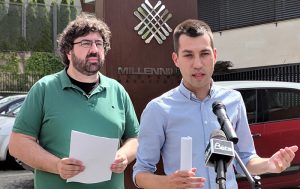 The construction company “Millenijum tim” has sued Dobrica Veselinović material damages in the amount of 12 million dinars, for opinions and statements expressed during a guest appearance on the N1 channel.

The appearance on the N1 channel, which triggered this second lawsuit, was made to discuss the previous lawsuit filed by this company against the movement Ne davimo Beograd, which was filed because we published a text about changes to the urban plan which would allow this company to demolish the Goša Research and Development Institute, in order to construct a residential and business complex on the site.

According to the new lawsuit, Dobrica Veselinović caused material damage to “Milenijum tim” by reducing the value of the company’s trademark in the amount of 100.000 euros, which is the amount of damages claimed by the lawsuit.

At the press conference we held on this topic in front of the company’s headquarters, Veselinović pointed out that the relationship between Ne davimo Beograd and “Milenijum tim” began in 2015, when we reacted to the expiration of the temporary permit for “Savanova”, the first facility within the “Belgrade Waterfront” project, which received all of its permits for a temporary exhibition stand and for a month, when in fact, this was a restaurant. On that occasion, representatives of “Milenijum tim” , together with Andrej Kesić, who is now a member of the municipal council of the municipality of Stari grad, threatened the gathered citizens. In the following years, Ne davimo Beograd has pointed to the connection between  “Milenijum tim” and the top city and state authorities, officials of the Serbian Progressive Party, as well as the company’s participation in the demolition in Savamala and participation in suspicious privatizations throughout Serbia.

In the past period, the “Milenijum tim” has sued several independent media outlets and organizations for damaging the company’s reputation, because of texts that reveal the company’s connection with the top authorities.

The legal team of the Ne davimo Beograd movement will respond to this lawsuit within the legal deadline, and inform the public about the course of the process.

Public action in Jagodina: Your Word is Your Power – You are Not Alone

The Ne davimo Beograd Women's group is part of the Independent Women's Group, composed of representatives of women's organizations, civic initiatives and socially engaged individuals, which held a rally in support of women and girls from Jagodina who are potential victims of sexual exploitation on Saturday, June 5, at the People's Youth Square in Jagodina. Through direct action in the field, we sent a joint message to potential victims that they are not alone in this process, and that they are guaranteed assistance and support by law without having to reveal their identity and participate in the investigation and court proceedings.

Veselinović for Al Jazeera: Instead of poisoning Belgrade’s citizens with vulgarity, we can offer kindness

"We want to be the better, the good side of Belgrade, the one that resides on the opposite side of the street from the one where illegal demolition and construction takes place," says Veselinović from Ne davimo Beograd movement.

The Ne davimo Beograd Movement held its third Assembly, at which reports on the work of the movement's bodies were presented, inaddition to a plan on how to liberate Belgrade, stop all harmful projects of the criminal government and fight for Belgrade to become a good city for everyone. At the final part of the event, the "Charter for a Good City" was presented, which was supported by over 150 public figures and independent intellectuals.