Lazović: Vučić and Đukanović provide political cover for the most serious criminal acts

If the election conditions were ten times better than in 2012, we would not be holding an inter-party dialogue under the mediation of MEPs, Radomir Lazović from Ne davimo Beograd (Don’t Let Belgrade (D)rown) movement stated for Danas, responding to the claims made by the President of Serbia, Aleksandar Vučić, tonight at a special press conference. 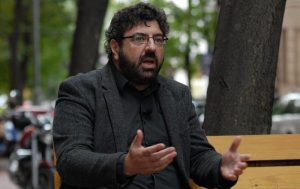 Aleksandar Vučić said that he believes significant progress has been made in improving the election conditions, although, he stated, the opposition and the government will never speak well of each other.

Radomir Lazović points out that, if the claims of the President of Serbia that the electoral conditions are better now than when the Serbian Progressive Party came to power, there would have been no boycott of the previous election cycle.

– We would not have SUVs in front of polling stations, pressure on voters, media control, tabloid haranguing, blackmail, threats and everything else that has happened since 2012. Independent experts, international organizations, analysts, all political parties of the opposition, and even the SNS itself indirectly, admitted that the election conditions are not adequate, and now he claims otherwise. Those claims are always very far from the truth, this time as well – concludes Danas’ interlocutor.

Speaking about the President’s appearance tonight at the special press conference, where he marked NDB as an organization that allegedly reveals passes on local information to certain European officials, while he dedicated a significant part of this public appearance to the conflicts in Montenegro, where he is being identified as one of the people most responsible for the incidents, Radomir Lazović says that the European Union and international institutions in general are disunited when it comes to their views towards the autocratic government of the SNS.

He also points out that the conflicts between Aleksandar Vučić and Milo Đukanović, an informal organizer of protests and riots in Montenegro, due to the enthronement of the Metropolitan of Montenegro at the Littoral in Cetinje, which ended in brutal clashes with the police, were fabricated and used to cover up criminal actions.

– The Ne davimo Beograd movement has very good relations with the European Greens, and we will use all the channels at our disposal to get their support for the fight against crime in Serbia, which reaches the very top. And that is exactly what Aleksandar Vučić and Milo Đukanović are engaged in. They serve as a political shield and screen for the most serious crimes. As their conflicts are being fabricated and as they pump up their chests as saviors of the nation, tons of cocaine go across the border. We are talking about this to both the domestic and foreign public. Although we have support from Europe, we have to fight to change this government ourselves, and that is why the great growth of support for NDB is so important. We hope that other opposition organizations will also give their contribution to the liberation of Serbia as soon as possible – says Lazović.

Countless times, Danas’ interlocutor notes, “we were the target of Aleksandar Vučić, who is trying to portray our struggle for a different political direction in Serbia as an attack on the state or the overthrow of the system.”

– It is precisely this attitude towards political opponents that makes him an autocrat. We are not destroying the system, nor are we against the state, but by fighting against the criminal team that kidnapped it, we want to save our country. Our state was abducted from the citizens and is in the clutches of the SNS. They have destroyed institutions, put themselves above the law and are now sucking public money into their pockets in the most creative ways possible through harmful projects. That is why we will do our best to replace Aleksandar Vučić and his party steeped in crime as soon as possible – concludes Radomir Lazović.