International Secretariat established: The first goal is membership in the European Greens

The construction company Millennium Team is suing Ne davimo, asking for almost 100,000 € for material damages. These are supposedly caused by our publishing of a text on changes to the Belgrade urban plan. This change allows Millennium Team to demolish the Goša Institute for research and development and build a residential-business complex on the lot. 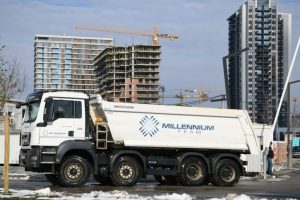 We find this lawsuit to be a form of pressure not only on opposition organizations in Serbia, but also on free media. “We consider this lawsuit a threat and a form of pressure on us, that aims to prevent us from informing the public about harmful projects implemented by the authorities and related companies” Dobrica Veselinović from Ne davimo Beograd said.

Millennium team is involved in several state-sponsored projects, the most famous among them being Belgrade Waterfront. The connections between this company and the ruling Serbian Progressive Party (EPP) were discovered by investigative journalists from the Crime and Corruption Reporting Network (KRIK), which revealed that Millennium team placed an apartment and a vehicle at the disposal of Minister of Finance Siniša Mali’s brother, which is considered corruption according to many experts.