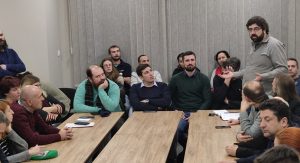 An agreement was reached on joint action and taking the next steps – blockades in Belgrade, Preljina, Peska, Loznica and the blockade of one border crossing on 14 January, as well as planned joint protests and blockades of other locations in Serbia in the coming period.

“The Ne Davimo Beograd Movement supports the struggle of the citizens of western Serbia, the people who will be most directly affected by the consequences of the implementation of the Rio Tinto project.” As before, we will support the maintenance of blockades in several places in Serbia.” – said Robert Kozma.

“The only way to permanently protect ourselves from harmful projects such as Rio Tinto is to change the progressive government and decide on the development of our country. Although the government has been shaken by the blockades and is showing signs of retreat, we believe that they will not give up on this project but will wait for the elections to end. That is why it is important that we do not give up the fight for a clean and healthy Serbia. ” – said Radomir Lazović.

On Monday 21 February, candidate for mayor of Belgrade Dobrica Veselinović, together with Ne Davimo Beograd activists and the MORAMO coalition, came by tramway to the City Electoral Commission and handed over the collected signatures for the city elections in April. They previously submitted signatures for the legislative elections in the Republic Electoral Commission.

Stefan Tasić for The Radicals: Transforming the System: New Hope for Serbia

Ne davimo Beograd has grown into an antipode to established politics and a force with the potential to transform an authoritarian and unjust system. It has developed bottom-up activism as its trademark to answer undemocratic and particular interests-focused politics.