The Electoral Assembly for Don’t Let Belgrade D(r)own was held on Belgrade Liberation Day, during which the plan for improvement of Belgrade was presented. New leadership was also elected tasked with developing the movement’s inner structure and expanding the membership, which has doubled this year alone. The membership elected Natalija Simović, Dobrica Veselinović, Radomir Lazović, Robert Kozma, and Biljana Đorđević for the Small committee, the main political body of the organization, during the Assembly.

More about the plan on how to liberate Belgrade you will find here. 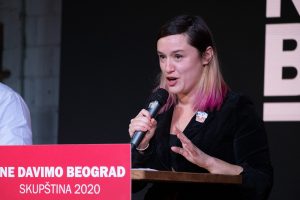 Natalija Simović has been an active member of the civil sector for the past ten years, focusing mainly on culture, social protection, women’s rights, and gender equality. In her current capacity, she is designing and analyzing different strategies that offer citizens support in their local communities throughout Serbia. Natalija has been a member of Don’t Let Belgrade D(r)own since its beginning. She was previously the Women’s Group coordinator and participated in creating the Group for people with disabilities. Furthermore, she was responsible for was fundraising to support the work of the Initiative. She is an active member of the European municipalist organization network introducing the feminization of politics in political movements. 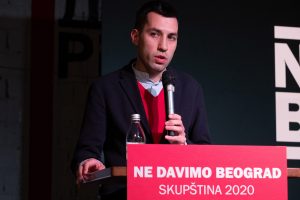 Dobrica Veselinovic was born in 1981 in Belgrade, where he spent his whole life, where he finished First Belgrade Gymnasium and graduated from the Faculty of Political Sciences in Belgrade. His informal education background includes numerous summer schools, seminars, and debates both in Serbia and abroad and holding many presentations and lectures. He has been active in the civil sector for over 10+ years. In the last couple of years, he mainly focuses on urban development, especially public spaces and public goods. He is one of the collectives’ Ministry of Space initiators, Don’t Let Belgrade D(r)own and Civil front. His interests include political theory, ecology, and urban development. He enjoys the ins and outs of people-organizing and making people smile. He tries to fix what’s broken, discover the forgotten, embellish the neglected, and finish the unfinished. 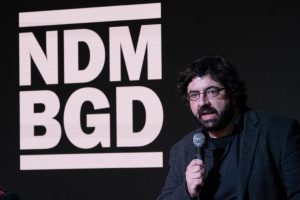 Radomir Lazovic is a Belgrade native, born in 1980. He spent over a decade in the civil sector with an active role in cultural politics, political participation of citizens, political, civil, social rights, and democratic innovation and media. He was also involved in several movements such as Street Gallery, Inex film, Cinemas: Return of the written offs, Occupation of Zvezda cinema, Ministry of Space, Don’t Let Belgrade D(r)own. These movements advocate for the innovational use of public spaces, fair resource-management, the transformation of public services, and promote a just and democratic society. Between 2015 and 2017, he was on the board of directors as the president of Independent Culture Scene of Serbia. 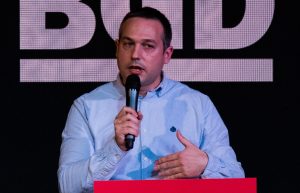 Robert Kozma was born in 1983 in Subotica. He graduated from the Faculty of Political Sciences and later on from Central European University in Budapest. He spent the past ten years organizing and implementing educational programs dealing with interculturalism and democracy. He’s been a part of Don’t Let Belgrade D(r)own from the start, with a current engagement in the Group for education. He is also engaged in developing the Civil Front, an alliance between similar initiatives and movements in Serbia. 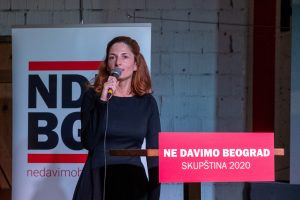 Biljana Djordjevic is a political scientist and an assistant professor at the Faculty of Political Sciences, where she teaches contemporary political theory. As both an academic and an activist, her fields of expertise are contemporary democratic theories, active citizenship, political ethics of migration, the relationship between democracy and feminism, and social constitutionalism. Previously, she was the coordinator of the Political Council of Don’t Let Belgrade D(r)own and a member of its Women’s and Socioeconomic Groups. Additionally, she is a member of the Presidency of the Serbian Political Science Association, Serbian Association for Legal and Social Philosophy, Board of Directors of A11- Initiative for economic and social rights, Academic Solidarity, and Engagement Network (MASA), and the municipalist movement Minim. 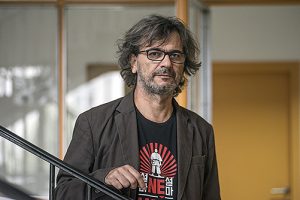 Prof. dr. Djordje Pavicevic was elected as the new coordinator of the Political Council. He is a professor at the Faculty of political sciences, teaching contemporary political theory for undergraduate and postgraduate programs. Even though an academic, he is actively participating in the public sphere on both the local and national level. Formerly, he was a member of the Political Council of Don’t Let Belgrade D(r)own. Involved in the work of the initiative from the get-go, he immensely contributed to the development of the Initiative. 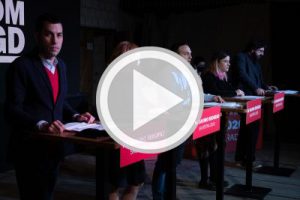 Check out atmosphere from Annual Assembly 2020 in this short video: The Liberation of Belgrade begins [english sub]