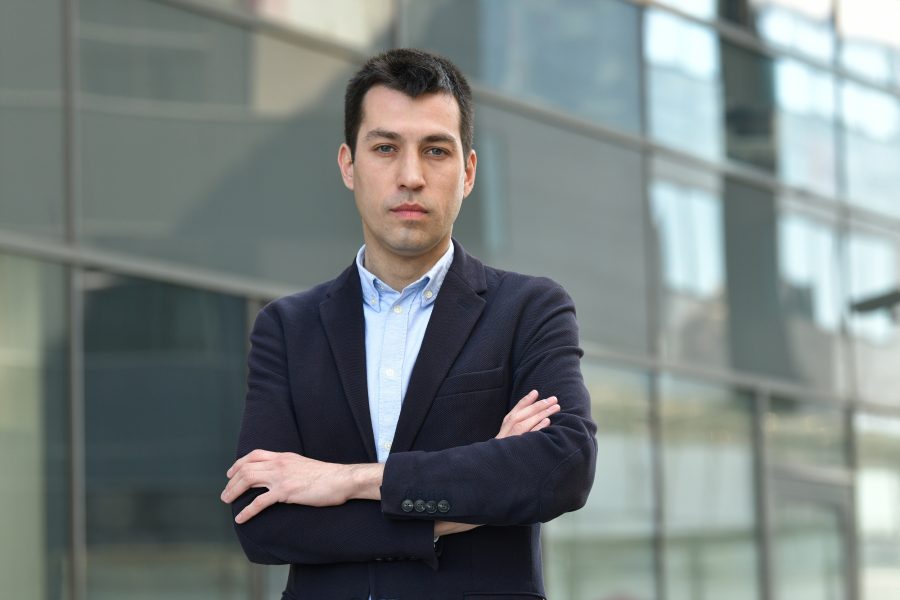 Is Belgrade a party town or a polluted Gotham? Is it an emerging city-break destination for adventurous travellers or a non-stop building site, where the proliferation of luxury apartment blocks contributes only to the vanishing of green spaces and the stench of money laundering?

As ever, the answer depends on your perspective. This city of some 1.7 million people, once capital of federal Yugoslavia and now Serbia, has changed rapidly over the past decade under the ruling Progressive Party. But not everyone believes it has changed for the better.

Former deputy mayor Goran Vesic, who effectively ran the city for the best part of nine years, declared last month that Belgrade has “slowly started to become a city for its people.”

“I am sure that today Belgrade is a much better place to live in than in 2013,” the Progressive Party official told reporters.

Vesic spoke after his party colleague and former water polo star Aleksandar Sapic took over the reins of the city.

Sapic was elected mayor by the slimmest of margins following an April election that saw the Progressives and their traditional partners very nearly beaten by an opposition alliance.

The result reflected widespread dissatisfaction among Belgraders with the Progressives’ blueprint for the city and its skyrocketing property prices, creaking infrastructure, pollution-filled air and traffic-clogged streets.

“The needs of the common people are not met at all,” said Iva Cukic, co-founder of the Ministry of Space NGO connecting activists, architects, artists, academics and residents in initiatives contributing to the “democratic and fair development” of cities.

“They never talk about the needs of the citizens of the city, except in election campaigns,” she said. “They care about investors and tourists. And that’s the direction they are taking us in.”

As Sapic takes over, BIRN has taken a closer look at some of the key issues he faces – property prices, pollution, traffic and utilities.

Prices beyond the means of average Serbs
In 2017, Belgrade’s then mayor, now Serbian finance minister, Sinisa Mali, called the capital a “city of cranes” in an allusion to the construction boom underway.

Belgrade is certainly building, but few Belgraders can afford what’s being built.

Serbia is one of the poorest countries in Europe, yet when real estate prices are compared to average income, Belgrade is one of the least affordable cities on the continent – fourth behind Moscow, Paris and the Croatian coastal city of Split.

Since the start of the COVID-19 pandemic in early 2020, the average price of a newly-built apartment in Belgrade has risen 17 per cent, to around 2,150 euros per square metre, according to official statistics. Prices are even higher when it comes to new builds in the sought-after neighbourhoods of Savski Venac, Stari Grad and Vracar as well as among the high-rises of New Belgrade on the other side of the Sava.

The average salary in the capital, however, is just 690 euros after tax, far below the average in the European Union, which Serbia one day hopes to join. Food prices, meanwhile, are the highest in the Balkans and only a little below the EU average, according to Eurostat.

“The situation is alarming,” said Cukic. “Most people can’t afford to buy a place.”

She cited official data of the Republic Geodetic Authority indicating that only five per cent of Belgraders are buying apartments. Of the apartments changing hands, 84 per cent are bought with cash, the rest by bank loan.

“Housing is being commodified and perceived as any other good,” Cukic told BIRN. “It is being treated as an investment and not a way to get a roof over a family’s head. It’s a speculation bubble.”

“There are serious concerns also about money being laundering through construction.”

Nevertheless, the city is brimming with luxury apartment condominiums, some of them part of a controversial riverside development called Belgrade Waterfront. Backed by a United Arab Emirates investor, the project has been branded elitist, lacking transparency and sensitivity for Belgrade’s eclectic architectural heritage. It is mostly funded, effectively, by the Serbian taxpayer, but with some apartments reaching 10,000 euros per square metre, they are well out of reach of most ordinary Serbs.

Lasse Lohmann, a 30-year-old German who has lived in Belgrade for the past three years, said he had fallen in love with the city, but was still shocked by the “arbitrariness” of how decisions about its future are made.

“That the area around the water must be part of some form of capitalisation is understandable,” he said of Belgrade Waterfront. “However, the way it has been done is unjust and serves only the interest of a few.”

Less green, more polluted
For 29-year old Stefan S., who has asthma, Belgrade is not the best place to live. In recent years, Serbia regularly ranks among the most polluted cities in the world. The air around Dimitrija Tucovica Street, where Stefan lives, is particularly hard to breathe, especially in winter.

“At that time I can’t go out, not even open a window,” he said. “The problem of air pollution is something that worries me the most.”

Climatologist Vladimir Djurdjevic of the Belgrade Meteorology Institute said that the Serbian government bears most of the blame for the pollution in the capital, given much of it comes from industrial facilities near the capital such as power plants in Obrenovac and Kostolac, an oil refinery in Pancevo and a steel plant in Smederevo.

City authorities can still act, however, by banning the use of fuel oil and coal for heating public properties, he said.

“It is bizarre that city institutions are using fuel oil while they are talking about the fight against pollution,” Djurdjevic told BIRN.

“I think that the biggest problems are neglect and a lack of interest by city management to deal with this because you cannot make much PR in the short-term by investing in solving pollution.”

In 1974, authorities under socialist Yugoslavia declared that, by 2000, there should be 45 square metres of greenery in Belgrade per inhabitant. Today, rules adopted by the city assembly in 2019, call for 23 square metres.

The city’s biggest municipality, New Belgrade, was known in the Yugoslav era for its greenery, but has lost almost 20 per cent of its natural or natural-like surface area over the past 20 years.

The loss of green spaces in the city centre is most damaging, said Djurdjevic, and cannot be compensated for by planting trees on the outskirts.

“The trend is to decrease the vegetation,” he said. “But a mature tree is worth far more than 10 newly-planted. You can’t blanket a whole neighborhood in concrete and make a forest somewhere at the periphery.”

“Without radical adaptation to heat waves, droughts and bad weather, Belgrade will become a city where it will be impossible to live for a few months every year,” said Dobrica Veselinovic, who ran for mayor on behalf of Ne Davimo Beograd [Let’s Not Drown Belgrade], which emerged out of opposition to Belgrade Waterfront and put environmental issues front and centre of its campaign.

According to Veselinovic, green reforms must go hand-in-hand with improvements in social equality.

“We urgently need to solve the problem of air and water pollution in Belgrade, by spending less, being more energy efficient, switching to renewable energy sources and helping people to switch to better burning stoves,” he said.

Traffic trouble
One thing Belgraders have in common is frustration with the city’s traffic.

In a survey conducted in May by the Centre for Local Self-Government, an NGO, most respondents listed traffic alongside pollution as their main grievances.

Residents are unhappy with the state of public transport, traffic jams and the difficulty of finding a parking space.

But according to Mirko Radovanac, a traffic engineer and transport planning consultant, the problem is not the number of private cars – of which there are fewer per inhabitant in Belgrade than the European average – but poor road infrastructure.

“The street network is just slightly better than 70 years ago, over which time the city doubled in population,” said Radovanac, citing a lack of ring roads, tunnels and bridges. Public transport also needs to be radically improved.

“Traffic management and control is the key,” he told BIRN. “With modern traffic control methods and the introduction of special signaling that gives priority to public transport vehicles, an increase in speed of up to 10 per cent can be achieved. Nothing is being done on that, even though the technology has been around for decades.”

Parking is at such a premium that in some municipalities, it reportedly costs more to buy a garage for a single car than it does to buy a small apartment.

One measure that promises to ease congestion is a planned underground train line, a five-decade-old dream that the Progressive-led government last year vowed to bring to life with six billion euros in funding. The construction will be carried out by the French engineering firm Egis.

Some experts, however, are perplexed by the route, which runs not through the city centre, where congestion is worst, but through districts where new settlements are yet to be built, mainly along the river. Some opposition parties have accused the government of routing the metro line in accordance with the construction plans of real estate investors with ties to the ruling party.

“The heaviest traffic areas are not the ones where the first metro lines go,” said Radovanac. “The other absurdity is that the main goal of the metro is to cut travel by car, but based on their own analyses that will not happen with these lines.”

Parties and poop
Pollution, traffic and skyrocketing rent aside, at least there’s the partying. Belgrade is frequently dubbed the ‘new Berlin’ for its non-stop nightlife, a major pull for young foreigners.

“When you visit Belgrade, you quickly understand why there has been so much talk about Belgrade’s bar and club scene,” said Lasse. “Be it a rave, jazz or Serbian pop or folk music, in the neighborhoods of Vracar, Stari Grad or Dorcol you find that place you prefer on a night out.”

But while authorities talk up the city’s tourism offering, the basic needs of Belgraders are left unmet. Official data show that a third of Belgrade’s residents are not connected to a proper sewage system. Waste water from homes that are pours directly into the Sava and the Danube.

In June, German chemist Andreas Fath halted his nearly 3,000-kilometre swim along the length of the Danube on reaching Belgrade, where scientists travelling with him detected too much pollution to safely continue.

In February this year, construction began on a new 55-million-euro sewer network on one critical side of the Danube, part funded by a loan from the European Investment Bank, EIB.

Veselinovic of Ne Davimo Beograd said he had little confidence that Belgrade’s woes would be resolved under the Progressives and new mayor Sapic.

He drew attention to the practice of outsourcing municipal services to private enterprises, which, he said, invites corruption and often fails to solve the problems of residents.

“Even when they want to solve something, they sign harmful contracts with private companies in so called public-private partnerships, PPP, which have not brought better quality of services but have simply destroyed the public enterprises and damaged the city budget,” Veselinovic told BIRN.

“Judging by Sapic’s staff, it all looks like a continuation of the previous ruling style – servility toward investors and neglect of the true and basic needs of Belgraders.”

BIRN sent inquires to the press office of the new mayor Aleksandar Sapic, but did not receive a reply by the time of publication. His spokesperson, after initial call, did not answer BIRN’s further questions on the possible interview.